Christmas, New Years and a Birthday came and went and much food was consumed by all.Â  Two of those occasions occurred at two of Brindleyplace’s, indeed Birmingham’s, finer eateries — Bank and Edmunds.Â  Sitting in opposite corners of Brunswick Square the two establishments seem to be eyeing each other like a couple of gastronomic champs, ready to rumble. 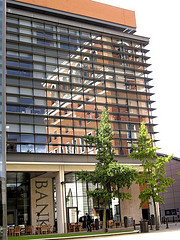 Actually there was a rumble but mostly in my belly when I went to the first of these restaurants, Bank.Â Â  From the moment we walked into the modern, elegant and spacious surroundings the service was impeccable.Â  The staff were attentive, friendly and most importantly relaxed.Â  We got there a bit early and sat in the bar area for a while and weren’t rushed to our table at the time it had been booked for, although it should be added that it was early and the place wasn’t too crowded.

I had a starter of mussels and although it was described as a small portion I got a fair few which was a good thing as they were delicious.Â  I honestly haven’t tasted mussels that good since having some on a trip to Brussels many years ago.Â  Other’s at the table had Thai Fish Cakes and the Chili Squid and these were equally impressive.Â  For the main I went for the catch of the day – which was a Lemon Sole, cooked with capers and butter.Â  Absolute genius food!Â  Others in the Party had Malayan Chicken – delicious!, Confit of Duck – delicious! and the Fish and Chips – delicious!.Â  The food was presented beautifully.Â  I finished off the meal with a selection of excellent cheeses. 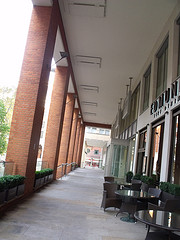 A couple of weeks after that thoroughly delicious trip to Bank I was lucky enough to be treated to a meal at Edmunds by Mrs Bongo Vongo.Â  It’s a much smaller place and in keeping with it’s description of itself as a place for fine dining the setting is more formal than Bank with full silver service.Â  The tables glisten with cutlery of many descriptions accompanied by a host of sparkling glasses.Â  The plates, tables and artwork on the walls are coordinated in colour and pattern and all very tastefully put together.Â  All this ever so slightfully intimidating taste is mitigated by friendly front of house staff who, as in any place with genuine class, put you at ease with their polite and attentive service.

It was one of those really cold days earlier this month and I saw and went for a warming Risotto of wild mushrooms with truffle oil & parmesan starter.Â  Before that got to us though there was served some complimentary freshly made light crispy cheesy twists with guacamoleÂ  — yum!Â  My risotto didn’t waste any time getting to me and it was just right, al dente and delicious.Â  After this there was another surprise complimentary morsel, a small pumkin soup with crunchy toasted sunflower seeds.Â  For my main I had Halibut with mussels, winter vegetables & a tarragon shallot butter. All perfectly cooked but theÂ  tarrogon shallot butter was the genious touch.Â  The missus had the Buttered puff pastry,with breast of cornfed chicken, confit of chicken leg, braised celery & chicken jus which in keeping with the culinary trend of the moment featured chicken cooked in three ways.Â  As at Bank, I finished things off with Chefâ€™s selection of English cheesesÂ with wafer biscuits and a fine selection it was too.

It was a good fight — a thrilla near the villa (yeah I know it’s nowhere near the Villa ground but hey) — and I think we’re really lucky in Brum to have a number of great places to eat all around Brindleyplace.Â  In the final count though, owing to a combination of thrilling food and excellent service, in a closely fought culinary contest I have to give the decision to Bank. 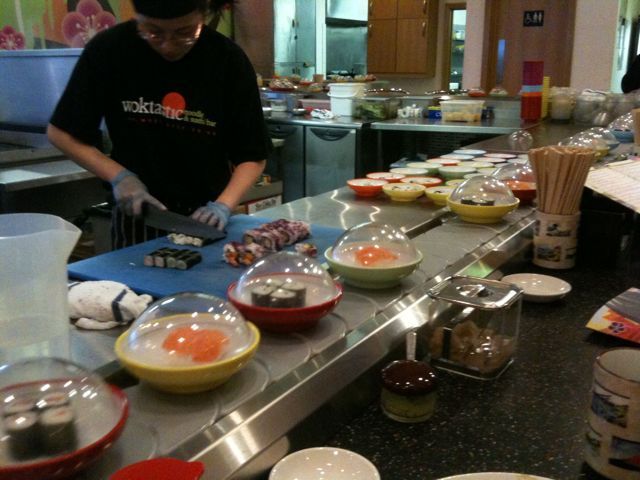 Tucked away to the side of the library theatre in central Brum is a Yo Sushi wannabe called Woktastic.

I’ve been meaning to go there for some time but a combination of the other half’s suspicions of all things Japanese and the alarming orange colour that seems to dominate has meant I’ve not managed to get there.

Fortunately, during last week’s International Food Festival, we got a taste of the tempura squid and that prompted us to try the Orangey-Japanesey-foody place.

I’m happy to report that the all you can eat nigiri and sushi buffet did not dissappoint although the everlasting Japanese green tea only seemed to stretch to two cups each. 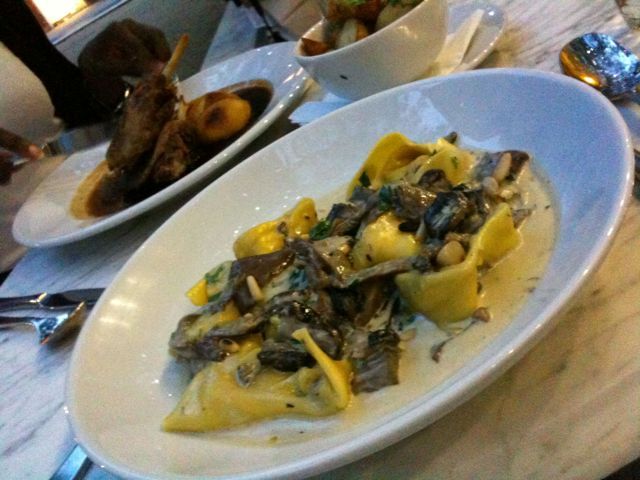 We went to Piccolinos in Brindley Place a couple of days ago and on the whole it was a very pleasant experience.

It was a balmy evening and Oozell Square with it’s quartet of restaurants — Ikon, Thai Edge, Cielo and Piccolinos –was buzzing with diners enjoying their meals.

We ordered some bread and calamari for starters. The bread was fine enough, nothing special, however the calamari was excellent. The staff were at this stage courteous, knowledgable, attentive and unobtrusive and we had no complaints with the service when our mains were brought out. I ordered a mushroom and cheese pasta dish which was supurb and my better half enjoyed a beautifully cooked crispy duck and apple dish.

Unfortunately the service just fell away towards the end of our meal with no one paying us much attention when we were in the mood for a desert. Which is a shame as it meant that they missed out as I expect did we.

Would we go again? … Yes but we’ll get a seat inside where they might be less inclined to forget about us.

We went off to Portuguese class last night only to get to the doors of the Brasshouse language centre and read that classes had been cancelled due to the snow.

So, we decided to go to the cinema and found that Slumdog Millionaire was just about to start.

Kola Janala, meaning ‘open window’, is produced and presented by Urmee Mazhar and is an interview/call-in show on Bangla TV — a UK based satellite channel. Recently, the show featured an interview with Saira Bronson.

For anyone who followed the tabloid stories of a few years back, the name Saira Bronson will be familiar. For everyone else: Saira Bronson is a Bangladeshi woman who became famous overnight when she married Britain’s most notorious prison inmate, Charles Bronson. (You read correctly … he had changed his name from Michael Peterson to that of the star of the Death Wish movies)

Saira Bronson (born Saira Ali Ahmed) seemed nervous sitting opposite the cool and collected Urmee Mazhar as the latter introduced her. As it transpired, she had reason to be. Saira began her interview by telling us about her arranged first marriage to a British Bangladeshi man and her subsequent arrival in Britain without friends, family or the ability to speak the lingo. Curiously, she had chosen to conduct the interview in a mixture of English and Sylheti Bangla. When the phone lines were opened there was an initial torrent of very bothered (mostly male) callers castigating her for what she had done and the lajja (shame) she had brought upon herself, her family and the bangla samaj (society). Although visibly shaken, Saira continued to tell her story — a narrative that was being coaxed carefully out of her by her skillful interviewer. Saira went on to allege that her already abusive first husband turned out to be a paedophile and that she simply had to leave him when her daughter was born.

The phone lines were opened again and this time caller after caller was very supportive of her and offered their best wishes to her for her bravery in doing what she had done and apologising for the attitude of the earlier callers. How fickle was this audience, hey? Though it should be said that this time most (but not all) of the callers were women.

Saira Bronson was now visibly moved by the support she was being given and was keen to continue with her story. Of course there were phone calls coming in regularly now and at 50 pence per minute I can understand why the programme makers were keen for them to do so. ( I wonder how long the waiting callers had to hold?)

Since we’re entertaining cynical thoughts, I might add that Saira wasn’t reticent in pointing out that her life story is all written down in her autobiography. (The more astute amongst you will notice that I too have jumped onto the bandwagon and have provided a link to her book via a bongovongo amazon associate account, so feel free to buy a copy and while you’re at it buy a hundred or so for your friends … kerching! … ta very much)

Anyway, back to the interview — some of the callers asked about her relationship with Bronson. She told them how she and her daughter had, by then, moved down to Luton and that after learning English and going to college she got a job working for an organisation who helped victims of domestic violence. (I bet you feel guilty for being cynical now dontya? … so why don’t you make up for it and buy her book via the link above hey? hey? hey? … oh! please yourselves then). It was while she was working in this organisation that her attention was directed towards newspaper articles about Charles Bronson. Bronson was from the Luton area and so there was more than the usual level of interest in the notorious criminal. The man intrigued Saira and after thinking about it for a long time she contacted him by letter.

Well, after many such correspondance and a few visits Saira Ali Ahmed from Habiganj, Bangladesh married Charles Bronson from Luton, England. Hardly a match made in heaven but as Saira pointed out, to several callers who asked why she couldn’t have found a nice muslim Bangla lad to marry, you don’t choose who you fall in love with. She also pointed out that Bronson had converted to Islam and had changed his name (yet again) to Charles Ali Ahmed. Actually, she had fallen for a couple of Bangla men before she started her relationship with Bronson but on both occasions they had cited the lajja associated with marrying a divorcee and single mother. Unsurprisingly, she dumped these guys.

By now, the calls of support were coming through thick and fast but one caller reminded her, rather mischievously, that she had recently divorced Charles whatever-his-name-is. Here, the skill of the presenter, Urmee Mazhar, showed through because it became evident that the whole interview had been a well-crafted narrative unfolding before the audience, who were being carefully shepharded into asking the questions that led to the next revelation.

Saira responded by telling us that after seeing the reportage of the Beslan school siege and it’s bloody conclusion, Bronson suddenly denounced all religion and became intensly hostile towards Islam. He wanted Saira to give up Islam as well and despite the best efforts of Saira, Bronson’s own mother and his solicitors he wouldn’t change his mind. Saira told us that she had a choice to make — it was either Bronson or Islam. Saira Ali Ahmed chose her faith. (Interestingly, she is still named Bronson on the book cover)

The interview was wrapped up with us knowing better this unsinkable Bangladeshi single mom and recognising a person who had risen from the horrifying depths of a monsterous marriage through the dubious heights of media noteriety to a position now where she lives her life, in freedom.