Forget this world and all its troubles and if
possible its multitudinous Charlatans — every thing
in short but the Enchantress of Numbers.

It’s 25 years since the miners’ strike and the media turn their mayfly-like attention spans to those events from 25 years ago. They’ll not mention it again till the 30th anniversary I expect.

I’ve just listened to someone comment on how there’s a whole generation now growing up who know nothing about Arthur Scargill’s battle royale with the evil Baroness Thatcher.

Arthur’s class war inspired battle against the reactionary forces of capitalism ended in defeat as did the hopes of all of us deluded young people of those days who thought that a socialist utopia was just a revolutionary battle away. Well, we were wrong. Arthur was wrong and eventually it has to be said Maggie was wrong too.

Socialism collapsed and now capitalism appears to be collapsing about our ears so what did any of us actually know — not a lot — so to paraphrase an Bowie, ‘All the young dudes (should) Carry the news. Boogaloo dudes. Carry the news’ 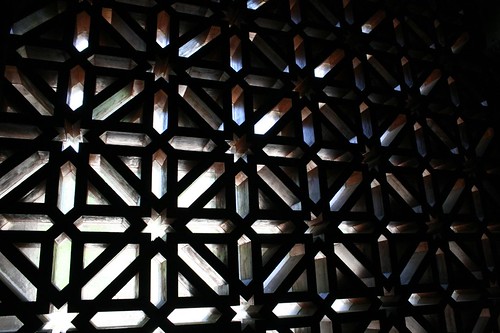 In the shade of a silhouette, originally uploaded by bongo vongo.

The temperature outside was in the 40s but inside the Mezquita it was cool and calm.