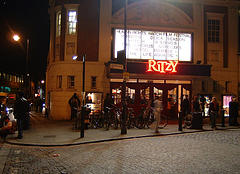 Earlier this year, Mario Van Peeble’s independently made movie BAADASSSSS! (2003) was shown at the Ritzy cinema in Brixton, London. Essentially the movie is about Mario’s dad Melvin Van Peebles and his experience of getting his groundbreaking independent movie SWEET SWEETBACK’S BAADASSSSS SONG (1971) made. BAADASSSSS! is also a film about a father and son as well as about filmmaking and has received glowing reviews.

Currently, it’s on general release here in the UK (if you’re in the Midlands; it’s showing at the Light House in Wolverhampton in early July) but back in March it was shown as part of the Human Rights Watch Film Festival and both Mario and Melvin were in attendance to give an interview after the screening. 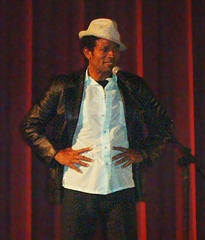 Mario explained how he decided to make the film while on the set of ALI (2001) and how it was filmed in just 18 days saying, “He taught me how to do it” in a hat tip to his dad. The interview revealed the two very different characters of father and son — the latter affable, the former acerbic. But this was clearly a well-honed act and the two complementary styles made for an interesting as well as informative interview, usually at the expense of the interviewer.

Although the movie was by a Black director about another Black director featuring a largely black cast, Mario emphasised the inclusive nature of the actual filmmaking, mentioning, “[The] beauty of being on the set was [it was] like a Benetton ad.”, and that, “the film is a family affair”. He pointed out that the multi-racial (his words) crew were in the unit because of their respect for Melvin Van Peebles.

While Mario expounded the intricacies of the filmmaking process during the interview Melvin in stark contrast would give short sharp one-liners in reply to most questions. For instance, the interviewer asked Melvin, in a lengthy and roundabout way, whether ‘Sweetback’ created a new set of stereotypes — “I said bullshit!” came back the reply. Cruel but very funny.

The interaction between the two Van Peebles’ on stage, added to the revelations about their early relationship in the film, left me wondering if a more amicable and mutually respectful one has now supplanted an earlier difficult relationship between father and son. Certainly it seems as if father and son have the ability to look back at the past and laugh. In the film — reflecting real life — Melvin is forced to sell his son’s bike in a desperate attempt to raise finance for his movie. Mario told the engrossed audience at the Ritzy that his father had bought a new yellow bike for him just a couple of months back. Melvin, sporting shocking pink socks, said, “I didn’t know it was an issue, here’s a tissue”. The audience lapped it up.

Despite the film’s rave reviews and the positive reaction from audiences, the film has had to endure a similar problem to that of it’s predecessor. In common with most independent films, distribution was a big problem and is reflected by the film’s modest success at the US box-office. In fact, the movie only got a UK release thanks mainly to the efforts of the British Film Institute.

When asked how Black Hollywood has changed, Mario said that the recent spate of Oscars has let off steam but reminded us that there are still no Black, Asian, Hispanic or women heads of studio. He paraphrased this more succinctly, “Different icing, same old cake”.