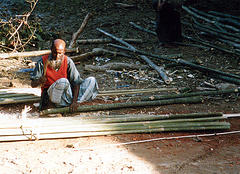 A few years ago, in Moulvibazar Town in the Sylhet Division of Bangladesh, I was lucky enough to be around when a bamboo hut was being built. It’s a traditional form of building using local, natural materials. So natural, in fact, that it’s entirely bio-degradable! Of course it is now an almost obsolete form of building material as concrete, bricks and mortar have replaced bamboo.

This particular build required the services of three, rather elderly, craftsmen who squatted down to work when a 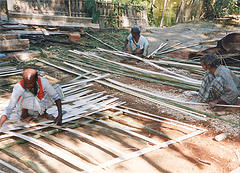 sufficient number of long thick green bamboo branches had been supplied to them. They began by cutting these into various lengths. I noted that local people gathered around to watch avidly as these guys worked — I got the impression that it’s not something they get to witness very often, especially in the towns. They (and I) watched with admiration as the craftsmen split some of the bamboo branches down along the shafts and flattened them out in order to make the ‘walls’. 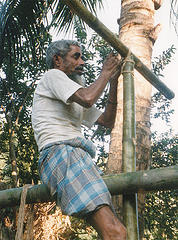 They weaved the flattened bamboo and secured them onto a frame ready to go onto the outsides of the building. To secure these a number of thick bamboo poles were driven firmly into the earth forming a framework for the walls and the roof to be put on. The wiry old men nimbly clambered about the framework and entertained onlookers with nostalgic tales of days gone by. Tales of bamboo buildings left standing when typhoon’s had blown away modern equivalents and of the days when ‘punjabis’ lived in these parts wearing their billowing pyjamas (this seemed to be a source of great amusement to the local crowd). 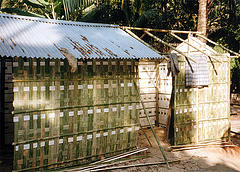 construct a sturdy two roomed dwelling. The pre-assembled walls were lashed onto the framework and a corrugated iron roof was attached. The latter is a concession to modernity — traditional thatched roofs taking longer to construct and also harbouring the mosquitos that cause the rather nasty dengue fever.

It was like looking into the past and all onlookers seemed misty eyed with nostalgia at this hut’s construction. 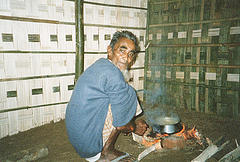 It really wasn’t that long ago that most families in the Bangladesh countryside lived in homes like this. This guy in the picture was called Shazid and he was a baburchi (cook) and had access to a modern (at least in Bangla terms) kitchen with gas powered hobs and running water on tap etc., but he swore that he much preferred to squat inside a poorly lit bamboo hut in order to cook meals.

At a later date, he invited me to visit his home in Kulaura and he did indeed live in a bamboo hut, however it was about half the size of this one and was home to him, his wife, their five children and all their worldly possessions. One of his daughters was a good student, he told me, and so he worked hard to earn extra money to pay for her education — so that she could have a better life.

I learned, a couple of years ago, that Shazid had died. I wonder what happened to his young family. Come to think of it, I wonder what became of the wise old bamboo hut builders.