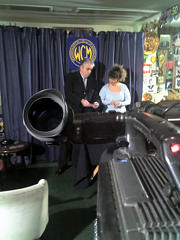 So, I’m staring at a picture of Enoch Powell in a small chintzily decorated piano bar in Wolverhampton about to film the local magic circle perform a mind-numbing number of card-tricks when I began to think that this is really no life for a programmer.

But with the next thought I remembered that I had long since tired of sitting at a keyboard for 40 hours a week wearily pretending to be doing some less than vital computering when in actual fact I was feverishly writing a program to send emails to everyone the next morning and trick the bosses that I was in work early.

Still, I found the picture of old Enoch a little disconcerting; especially as it was prominently placed on a wall along side pictures of Michael “It’s not racist, it’s not xenophobic. People say this is a problem out of control and something must be done” Howard, Margaret “People are really rather afraid that this country might be rather swamped by people with a different culture” Thatcher and dear old Winston “I am strongly in favour of using poisoned gas against uncivilised tribes” Churchill.

The whole place looked like it was some conservative granny’s front room but with a bar in the corner; there were Queen Mother pictures and world war two memorabilia plastered on the walls. There was even a shrine to the Queen and Prince “If you stay here much longer you’ll all be slitty-eyed” Phillips.

It would have been quaintly charming had it not been so chillingly offensive.