As part of the 6th Bangladesh Film Festival, Mostafa Kamal, the festival’s director, has included several programmes of short films. I managed to get to Monday’s programme — held at the Whitechapel Art Gallery in London’s East End.

The Gallery is literally next door to Aldgate East underground station. Curiously, to attend the actual short film programme I had to go in through a side entrance down a small narrow alleyway — as if this were some furtive activity that the gallery would prefer not to publicise (I’m sure there was an innocent explanation but I prefer to speculate darkly). 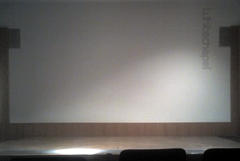 Initially, there were only a handful of people in the small lecture theatre where the short films were due to be shown. The proceedings began promptly which meant that people were coming in right through the programme. (Bangla Mean Time has rarely been subject to the same rigourous interpretation as it’s Greenwich counterpart).

The programme kicked-off with BANSHI by Fazlul Alam which was based on a piece by Nobel Laureate Rabindranath Tagore. It was probably the weakest of the four short films in terms of camerawork, The story was about a man living in the squalour and poverty of a big city who, forlornly, ponders his current state after having ran away from his lush green village and an equally lush (at least in his imagination) bride. A second Tagore-poem based film followed, called A HALF ACRE OF LAND, it was about a young man who is cheated out of the eponymous half acre. (It’s a theme that is common in Indian film.) The story is narrated to us in a lilting tone about how the young man becomes a hermit but how many years later he returns home and is angry at his former land for being fertile in the service of the new landlord.

The third film, and my favourite of the four, was THE TRAP by ‘Pappu & Neegar’. It adhered quite closely to the old filmmaking maxim — ‘show don’t tell’. It begins with a scene of a young woman who is in a bedroom by herself and who listens to a radio, watchs TV, tries on make-up. Later we see her tending to a mynah bird in a cage which is hanging in the balcony of the flat she is evidently in. The balcony has a grill over it, echoing the bars of the cage and hinting at the young womans plight. The lady of the house comes back from a shopping trip and it’s clear that the young woman is her servant. later the lady of the house and her husband leave the house for the evening, telling the young woman that she shouldn’t prepare anything for them for that evening. Once again the young woman is left alone in her gilded cage. 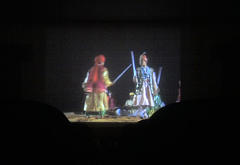 The final film, LETO, was the longest of the four and was a programme made for Channel I (a Bangla satellite channel). It was about the early life and works of the National poet of Bangladesh, Kazi Nazrul Islam. By Rafiqul Bari Choudhury, it featured recitations of the “rebel poet’s” songs as well as academic explanations and re-enactments of the poets life as a boy in a leto group. Although the format of the programme was a little staid it was still interesting and the dramatised parts gave a sense of the wit, charm and humour of a young Nazrul Islam. Particularly interesting was the ease with which the 12 year old poet could compose and recite in a mixture of Persian, Bangla and even English. In one scene, there’s a poetry ‘clash’ between the boy poet and an older poet and it was impossible to not draw parallels between his self-referential lyrics and some of today’s rap stars’ lyrics.

All in all a fascinating programme and one which, wholly appropriately, coincided with the birth anniversary of Nazrul Islam.