The train from Santa Cruz to the Bolivia/Brazil border stank it’s way past Bolivia’s vast weirdness eventually reaching the border. Or at least what I’d thought was the border, it transpired that the border crossing point was a cab ride away so we got one. The cabbie was helpful and friendly which was just as well as without his help I may well have been stuck in Bolivia for the rest of my life. You see, at the border, the customs officer decided that the scruffy brown gentlemen with a brand new British passport had to be an illegal emigrant … that’s right I said emigrant. It took the combined wit, charm and persistence of my ex-girlfriend-turned-travel-companion and the aforementioned Bolivian cabbie to persuade the moustachioed official that I was indeed a British subject and not, as he suspected, a Bolivian passport thief who was taking the piss by pretending not to understand his increasingly irate Spanish.

That first night we booked ourselves into a small border town backpacker’s dive. I even managed to track down a football match in this town by following the sounds of a ref’s whistle. It’s true — Brazilians are crazy about football. Out here in a little border town hundreds of miles from anywhere, they had a covered, floodlit indoor football stadium and there were well organised fully kitted out teams playing the ‘beautiful game’ … urm … beautifully. 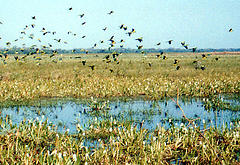 But that was the last night of civilisation we were to have for a little while. The next day Gil of Gil’s tours whisked us off to the vast open wetlands of Brazil — the Pantanal. We travelled in the back of a truck for four hours through a vast almost empty landscape. I wasn’t prepared for the scale of the place; that you could travel for four hours and still be in the same landscape. After the mountains of Bolivia the tropical flatness of the Pantanals couldn’t have presented itself as a bigger contrast. 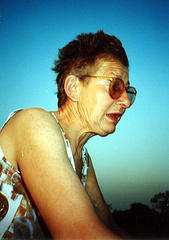 Amongst our fellow passengers, in the truck, was a retired teacher from England — a formidable old dear — who had decided to cycle around South America for a lark! and a nutty Frenchman who seemed to have the horn for all women everywhere. Curiously, we had first met the Frenchman in La Paz, Bolivia several weeks ago and here he was again.

The campsite in the Pantanals was a simple affair, a clearing next to a bend in a river with all the amenities that pampered backpackers love when they’re pretending to be roughing it. Everyone was allocated to a tent and for five dollars a night we got food, lodgings and walking tours into the wetlands. The air was so sweet you could literally taste it, the water was fresh and clear, the whether was hot and humid but not too uncomfortably. 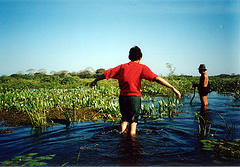 The tours were gentle affairs, wading through the giant rat infested marshes, into forests crawling with giant ant-eaters and across rivers full of giant anaconda, piranha and crocodiles. Lovely.

A few grilled piranha days later, a couple of the local guides decided to go hunting and asked me to go along. I think they mistakenly thought that I was one of them as by now I was reduced to telling people, when asked where I was from, that I was Indian. (Try telling somebody who’s lived in an Amazon outback most of their lives what and where Bangladesh is — and it was no use telling anyone that I was British as clearly I was no ‘gringo’). So Indian I became … except that they thought I was their kind of Indian and not the Mahatma Ghandi type! 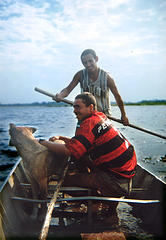 Well, I’d had enough of the boring tourist tour by then and so I latched on to the two hunters eagerly. We set off in the early afternoon; me the two hunters and a small pack of very intelligent hunting dogs of no particular pedigree. We travelled by boat away from the camp and into the deafening silence of the open wetlands. When we landed on the other side of a wide river we set off on the hunt. I was sort of fit(ish) in those far off days so I managed to keep up with the hunting party. They had machetes and pistols; I had a Boots disposable camera.

There was a false scent a couple of times when the dogs caught wind of something and gave chase. When we caught up, it was usually some poor little creature that was already torn to shreds. It was going to be a gruesome day — I could tell. 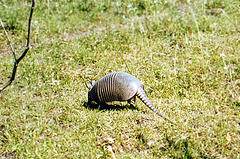 The afternoon wore on and I was getting knackered but I was still keeping up somehow. Actually I had no choice as a realisation was beginning grow within me that should I get lost around here I would be well and truly up the river without an AtoZ of the Pantanal.

Suddenly, the dogs started barking furiously. They had got ahead again but this time the sound of something squealing could be heard amongst the barks. We had been wading through some marshy bits at the time but when the two hunters heard the commotion up ahead they seemed to lift themselves above the water and bolt towards the action. I couldn’t keep up as my ability to levitate over water wasn’t quite up to their standards. I decided not to panic and choose to remember my cries after them of ‘please wait for me mighty hunters because I’m very frightened’ as ‘go for it lads, I’ll catch up’. 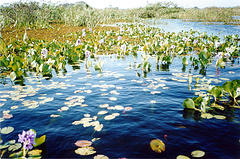 I began goose-stepping towards the sounds of mighty hunting, which by now was a cacophony of dogs barking, big beastie squealing, hunters shouting and a couple of loud gunshots. GUNSHOTS! Jeez! — this was getting exciting and I was missing all the action. I goose-stepped faster through the marsh. Of course, I was bare footed, just like they were — afterall, I was one of them wasn’t I — but that bit of bravado resulted in my cutting my foot a couple of times while I was bouncing towards them. It was at this moment, while I was entertaining thoughts about sharks from the Atlantic, swimming a thousand miles up the Amazon, racing towards the source of the juicy blood, that I spotted right in front of me, a crocodile.

Needless to say, I froze. 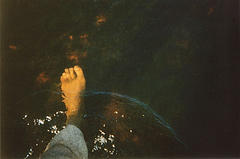 I waited an eternity, how would they break the news to my friends and family I speculated, “Sorry, we lost him in the Pantanal; one moment he was behind us and the next there was just a fatter than normal crocodile where he used to be.” I waited a bit more — the old Peruvian marching powder still had a lingering effect and I began wondering if this had all been staged by the Frenchman in some dastardly Gallic plan to get his hands on the ex. Tick followed Tock followed Tick followed what the hell was the thing waiting for. The crocodile didn’t move. A thought occurred to me — maybe I wasn’t about to be eaten after all. I decided to test this hypothesis but not before I took a picture of my foot — if the crocodile was going to eat it then I wanted to make sure I had a picture of it for posterity. But the crocodile didn’t eat it nor indeed did it eat any part of me. I moved to the side of it and then with a speed and nimbleness I had never realised I possessed, I levitated across the marsh and towards the hunt. 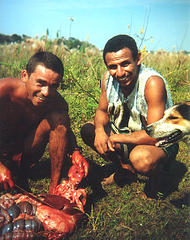 My brush with death, with it’s nasty big pointy teeth, didn’t cut much ice with the hunters who were keener upon showing me the results of their hunting prowess. I have to confess it was quite impressive — I don’t know what the creature had once been but it was definately dead and the guy with the pistol (who’s name happened to be Jabba) said that he had shot it through the heart with a single bullet from his pistol while the beastie was moving. And to prove it, he sliced open the creature and pulled out it’s heart. Sure enough, in between hazy bouts of nausea, I could see a heart with a single bullet through it. Very impressive and just a little bit scary. 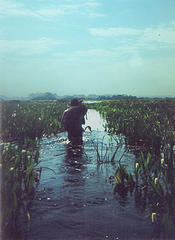 They gutted the creature then and there and hacked it into quarters, both to get rid of the offal which would rapidly go off in the heat and to facilitate the carrying of the carcas back to camp. But not before taking the best pieces, heart, liver and kidneys to the dogs — my (almost) namesake said that that was their reward for cornering the prey. I was finally to become a useful part of the hunting party now as they loaded my shoulders with a hind-quarter of the kill to carry back home. As you can imagine I relished the prospect of wading through pirhana infested waters with blood trailing behind me but I had nothing to fear as those really really clever dogs seemed to take up a rearguard position and nudge me in the right direction whenever I started staggering off track.

Eventually and a little reluctantly we left the camp — there was a plane to catch in a couple of days and Rio was nearly a thousand miles away. We said goodbye to the other backpackers, Israeli, Dutch, Irish and French (mutter…grumble…mutter) and began a long coach trip towards Rio de Janeiro.

Brazil is a vast land and easily plugs into the wider world in a way that Bolivia just doesn’t. In Rio we stayed one night in a hotel in a seedy part of town and when I went for some food, to a street cafe just opposite, I ended up meeting an old merchant sailor who had served with Indian and Pakistani crews and was the first person on the continent who believed me when I told him I wasn’t a local. He could tell because of the amount of chilli I had put into my food. 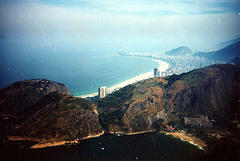 I did the usual touristy things — went to a nightclub where a line dance erupted spontaneously on the dance floor (not as naff as it sounds) — hung out at Ipanema beach ( went ahhhhh a few times) and went up that cable car tourist trap thing (that James Bond’s arch-foe “Jaws” falls down to earth in from the movie Moonraker). But all too soon it was time to leave.

It somehow seemed appropriate that the ex and I came back to dear old Blighty safely but in separate flights. However, the raised eyebrows I got off the British Immigration Control did trigger off a mild panic that I was about to be deported back to Bolivia but the Brummie(ish) accent seemed to convince them that I was one of her majesty’s loyal subjects. Hurrah!