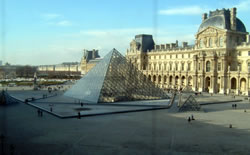 Had to do the museum thing when I was across in France. No doubt – conditioning which is the result of countless rain soaked school trips during childhood. Though why that hasn’t built up a mortal fear of museums in me I don’t know – okay I was a nerd then and I’m still a nerd … and I go to museums. But as museums go the Louvre isn’t half bad.

Having descended into the lobby of the museum via a huge glass fake pyramid you climb into the various wings of the Museum (oooh those Parisians do like their stairs). But the vast majority of culture vultures were there heading for one exhibit only. The Mona Lisa.

The Museum authorities know a good thing when they have one so ‘La Giaconda’ is sign posted very clearly right from the entrance onwards. The same, unfortunately, can not be said for the exit signs but that’s another story. So a steady train of humanity dutifully marches on through the halls of the French, Spanish and eventually Italian Schools of paintings, apparantly oblivious to their charms until they emerge into ‘her’ presence. 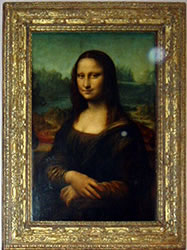 Stunning is all I have to say … not the painting but the effect of 1oo’s of flashguns going off in your eyes as the vultures swoop upon her. She might have been a pop star judging by the way the hoardes mill around her, elbowing each other viciously in the battle royale that takes place for the best camera vantage points. It’s a bit of a surprise that flashguns are allowed by the Museum anyway but I guess they know what they’re doing. Well, if it didn’t bother the American/Japanese/French tourists I certainly wasn’t going to let it bother me so I pulled out my Fuji and joined in the flashing frenzy.

Anyway, it’s probably a fake – they wouldn’t keep the real one there now would they … would they? Still, you have to say – she does seem quite serene despite all the fuss going on around her. 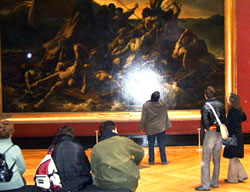 Having thus abandoned all pretence of being interested in the art for art’s sake I rushed ahead looking for the ‘celebrity’ paintings which I could tick off my list of famous things I’ve actually seen. There weren’t that many exhibits that I knew anything about and one I did want to see, an El Greco, was actually not available to view but I did find a couple of others. The first being Gericault’s “The Raft of the Medusa” which I’d read about in Julian Barnes’ ‘History of the World in 10 (1/2) chapters’. (I went through a very pretentious phase about a decade ago and would read lot’s of stuff without gaining any understanding, thinking that at some point in the future I could talk about it at length during some sort of dinner party and thus impress some young lady – surprisingly that scenario never happened).

So what can I say about the “The Raft of the Medusa” … it’s really big. In fact, a lot of the paintings were really huge, which is great – you can sit in front of them for hours, resting your feet which are tired from all the walking up and down stairs, noticing the details like how many little dogs you can see in the picture. Who needs Open University Lecturers hey? 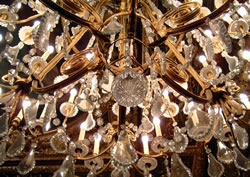 Of course, the Louvre has more than just paintings and as I was strolling through the corridors trying quite hard to get back to where I’d left my companion, who’d very sensibly long since given up walking, I wondered into Napolean III’s home. It seems as if they’ve given over an entire wing to HR Napoleon H and you’ve got to hand it to the guy – he knew how to live like a king. You may remember him as being the one who cut huge swathes across Paris in order to build the Grand Boulevards. Apart from drastic town planning he seems to have had a thing about chandeliers too … he’d have got on well with my mom.

Eventually I managed to work out that ‘sortie’ means ‘exit’ and found my way out of the painting wing. This still left the Egyptian wing, the African and Oriental Arts wings and Chicken wings (probably not that last one) but I’ll have to save these for some future trip to Paris … (yeah sure) but one thing I won’t have to come back for, to tick off my list, is the Venus de Milo.

I aint too sure if I agreed with the blurb about her which suggested that she’s the ideal of womanhood but she is about 2200 year old and not looking too bad for all that. Of course it’s impossible to look at something as famous as this without having some cigar advert force it’s way up into your conciousness. So I stood there looking at this masterpiece of classical art all the time imagining some ancient sculptur lighting up a slim panatella while he contemplate’s lopping off the second arm. It’s probably a fake anyway.