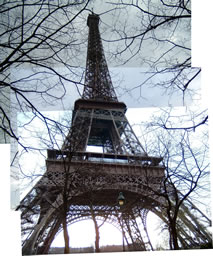 In case you were wondering, I’ve been in France for a few days … what do you mean you don’t care?

I’m going to tell you about it anyway — Paris is just like London except a little bit curlier. I went there for the first time last year and didn’t think too much of it, feeling that it had the look and feel of any big european capital built upon the foundations of an imperial legacy but of course I’d missed the point. It’s the details here and now that count.

The smell of Camembert as you walk along the narrow streets for a start off. Don’t get me wrong — I loved it. Infact the whole idea of food pongs wafting into your nostrils as you swan about a big modern capital is fine by me and Paris has that even in a sniffling cold February day. Not that I’m trying to reinforce any stereotypes here as a walk down Ladypool Road in Brum, or Green Street in East London will testify to the rich pageant of smells at last ponging up the thoroughfares of Blighty. But with all these locations it’s a testimony to the wholesomeness (or not) of foods that get’s me going. I mean what’s the point of food just looking good? It’s got to smell good as well and what’s the point of selling food if it doesn’t attempt to attract customers through all their senses. The French shop keepers know this. I’m going on about this a bit too much … I’m off to have some lunch. 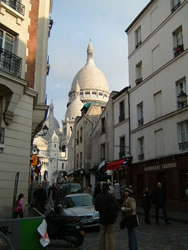 … Okay, back from lunch and a little siesta too (a fringe benefit of being in between jobs). There’s a reason for this hunger and tiredness (apart from greed and laziness that is) it’s because of the Sacre Coeur. It’s located at the top of a small but steepish hill just west of the Gare Du Nord, not too far away from the centre of Paris and I was staying in a hotel quite close to it. I was over in Paris at the invitation of a friend while she was looking for a place to stay in the city. Luckily she found a place fairly early on and even better it was also very close to the Sacre Coeur. Unfortunately it was on the other side of the hill. So a journey of a few hundred metres transformed itself into an epic hike over tourist infested alleyways to the top of Mt. Sacre Coeur and back down again. No problem really except when you’re doing it about three times a day and me without my hiking boots or more importantly a ready supply of oxygen. I bet those nuns have strong legs.

So, with the extra time we headed off towards the tourist traps of Paris. I read in an excellent book about travel photography, “Travel Photography: A Guide to Taking Better Pictures” by Richard I’Anson that the best thing to do when in a new place is to get out into the touristy places and just get that done and then go to the genuinely interesting places. So I did, unfortunately I never got out of tourist mode but then again I aint a travel photographer. Getting about in Paris is a doddle. Most tourists use the very frequent and rarely over-overcrowded Metro system. Which unlike in London has plenty of connections south of the river. The only niggle I have about travelling about in the city is the very scant attention paid to the needs of people with mobility problems. Most of the Metro stations appear to have no escalators or lifts and I wonder what people in wheel chairs or parents with prams do to get around.

If you’re driving then you’ve got access to these massive boulevards built by Napolean III. They were intended to make the movement of troops easier in times of trouble which Hitler’s army were able to demonstrate quite ably when they invaded the city a few decades later. However, in these Euro cordial times the citizens of Paris zoom about the place using them. And boy do they zoom about … apparently traffic signals are merely advisory in France. There should be some sort of warning for visitors. So at crossings perhaps as well as a green man walking and a red man with his arms akimbo there could be an amber man shrugging his shoulders.