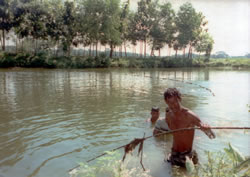 Well it’s about time I got back to that travel snapshot thingy that I used to do — it’s a kind of birthday present for Bongo Vongo who’s just turned one – ahhhh.

So, there I was in the middle of Bangladesh, well actually in the North Eastern Division of Sylhet and to be precise my parents’ home district of Moulvibazar, watching a bunch of blokes splashing about in water. I’d spent a couple of weeks in Dhaka but the purpose of the trip had been to get back to my roots and that kind of malarkey. So we made the uncomfortable journey across the country along the barely maintained roads to my dad’s ancestral village of Kachua, near Moulvibazar Town. 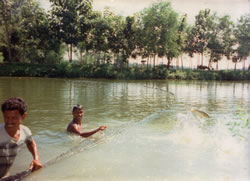 The village is ‘run’ by one of my uncles but other than himself and his wife there were no other members of the family who lived in Kachua anymore. With the exception of a couple of uncles and cousins who lived in town, the whole clan now lived in either the UK or the US. This is quite a common feature of this part of Bangladesh and it has the highest proportion of bideshis (literally – foreigners) in the country. In fact it’s resulted in property prices in this otherwise remote region to be as high as, if not higher, than in Dhaka, (it’s like Sunderland housing prices being the same as London’s). All the ex-pat Bangladeshi’s plough their hard-earned pounds and dollars into property back in the Desh … why I don’t know, it’s not as if their children are likely to ever live there. But the guys wading through the village tank (an artificial pond stocked with fish but used for domestic purposes too — yeah I know but eventually you get used to the lax attitude to hygiene) didn’t know about house prices in the UK and I dare say they didn’t care. 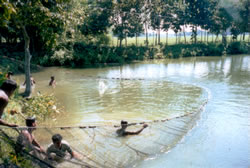 My uncle had decided, one day, to catch the fish in the tank. We had used a fishing rod previously but I think he wanted to put on a show for me and if there’s one thing Bangladeshi’s like more than anything else it’s fish especially when there’s a show involved in their capture. So he hired the services of a team of tank fishermen, hence the blokes in the water, for the job — payment would be in fish.

The idea is that they would start off by stretching out a net along the breadth of one end of the tank and then teams of fishermen would wade along the edge of the tank, slowly but surely, catching all the fish in the tank as they pulled the net across to the other side. A genuine dragnet I suppose. 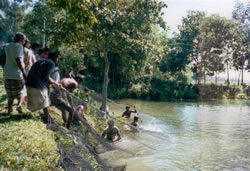 In reality not all the fish get caught, they’re quite clever these Bangladeshi fish, as the net is dragged across you can see the silvery flashes of the smart ones leaping over the floats and splashing back into the safe side of the tank. Thus continuing they’re fishy lives in the village communal bath water for a few weeks longer … I think I’d rather get caught! Having said that, Bangladesh has a serious problem with water on a number of fronts – in the Northern districts there is a severe lack of it due to the Farakka Dam up river in India and all the politics over India’s latest plans for diverting the waters of it’s (and by extension Bangladesh’s) rivers. 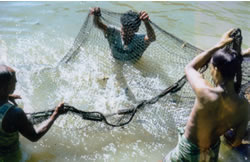 (Also, all over the country people are now beginning to suffer the effects of years of arsenic poisoning because of the contamination of well-water. Rather tragically, tube wells were cited by well intentioned (British) experts as being safer for the population than the cholera-ridden ground water they’d been drinking from time immemorial. Hindsight can be a cruel critic.)

As it gets pulled in to the opposite bank the rest of the fishermen leap into the water and carefully bring the ends of the net together, grabbing the less smarter fishes when they find them and throwing them onto the bank. There the chief fisherman, more of a foreman really and the only one who doesn’t get his feet wet, puts the gasping, glistening and flapping fishes into baskets. 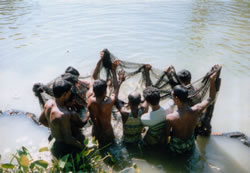 His crew continue to pull the net together till they all meet at a point whereupon they lift the remaining portion of the net and catch the last desperate and, it has to be said, delicious fish. My dad, who had witnessed such events since childhood, reckoned that the fishermen were pulling a fast one over on my uncle. He was convinced that they had secretly stashed fish away into the voluminous folds of the net while they were wading across the tank. Indeed, there weren’t that many fish in the baskets in the end — the wily fishermen’s foreman saying that they’d all leapt over the net and that besides there weren’t that many fish in the tank to start off with. 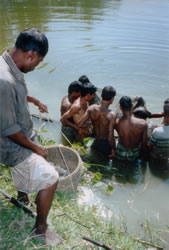 It has to be understood that as well as the legendary love of fish, Bangladeshi’s love a good argument — they’ll argue over anything — I suppose it’s just another form of entertainment, like a game of ping pong but with accusations of tog (fraudulent intent) instead of balls. And in this game you can’t actually accuse the other guy of cheating, unless you’ve got the evidence but in the end it’s all part of the bargaining process and eventually an equitable division of the spoils is made.

That evening I ignored the little voice of western conditioned hygienic reason, screaming in the back of my head for me to become a vegetarian if only for the night, and tucked into some lovely organic biryan machh aur bhat (spiced pan-fried fish and rice) with the rest of the village.