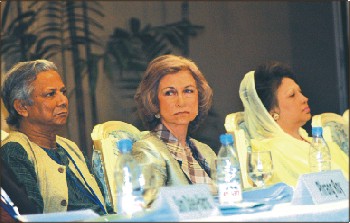 My mom informed me that the Queen of Spain was in Bangladesh yesterday — so it must be big news. And despite looking a bit bored in it, there she is (urm … the Queen of Spain that is and not my mom) sandwiched between the daddy of Microcredit, Muhammad Yunus and Bangladeshi PM, Khaleda Zia in this picture. They were attending the launch of the Asia Pacific Region Microcredit Summit which began in Dhaka yesterday, reports the Daily Star.

A succinct explanation of Microcredit is provided via the Meatball Wiki :

From “Looking at Poverty, Seeing Untapped Riches” [1], an article in the New York Times (October 26, 2000) by Tina Rosenberg:

Microcredit is the child of Muhammad Yunus, a Bangladeshi economist, who began in 1976 by lending 62 cents apiece to a group of 42 artisans — thus freeing them to buy a day’s materials in advance and sell the finished product to whoever they chose, at market rates. Mr. Yunus founded the Grameen Bank, which gives small loans mainly to women. The borrowers need only social collateral — they form groups of five and all are cut off if one defaults. Today more than eight million people in more than 58 countries get microcredit loans. A few years ago, a study of Grameen borrowers showed that one-third had escaped poverty.

The actual figure is more like 50 million and the Washington based Microcredit Summit Campaign aims to reduce world poverty by providing microcredit to 100 million people by the end of 2005.

Spain for it’s part, according to Queen Sofia, has assigned $280 million for fighting poverty, especially in Latin America. Though what she made of the hartal (a peculiarly Bangladeshi form of general strike) causing misery for poor Bangladeshis outside the comfy confines of the Dhaka Sheraton was not mentioned in the report

Anyway, you can learn more about women and microfinance and women microentrepreneurs in the Daily Star or read what Grameen Bank’s founder, Muhammad Yunus himself, has to say about it at the self-styled Home page of Microcredit.