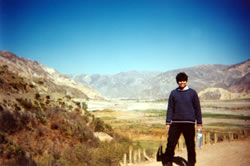 Isn’t Bolivia weird hey? … you don’t hear anything about the place for decades and then an anti-capitalist revolution ousts the gringo-friendly el presidente from his cushy office. So perhaps, from the land where Che Guevara bit the bullet, a new and glorious people’s revolution might emerge to sweep through the continent and then the world – cleansing the earth of corruption, hypocrisy and greed? Hmmmmm … don’t count on it! but I bet it’ll get Condeleeza’s knickers in a twist – no doubt she’ll soon be sending in the ‘advisors’ to sort out the revolting peasants.

But I hear you ask – why are you waffling on about Bolivia in the snapshots category? Well cos I’m gonna tell you all about the time I went there on holiday a few years ago. It was infact the first ‘foreign’ place I went to as an adult, having been content to stay in dear old blighty for the previous decade. Actually, I probably wouldn’t have bothered to go if it hadn’t been for a girlfriend who was out there as part of a year-long back-packing thing she was on.

Needless to say I was a bit infatuated with her at the time hence the intercontinental dash to South America. Also, needless to say (but I’m saying it anyway so that makes the phrase ‘needless to say’ … urm … needless) that the fact that she had left on her travels many months earlier should have set the alarm bells ringing. Well, ya live and learn don’t ya? 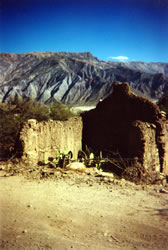 You’ll notice that the pictures are a bit funny but that’s due to their being taken with a Boots disposable jobby and so there ain’t that many of them and they’re not that clear. Infact I only took pictures about a week or so into the trip so didn’t manage to get any of the capital La Paz. This is a shame because the highest capital city in the world was also the most bizzare – it was brown! The people were brown, the buildings were brown, the food was brown and most disturbingly the water was brown. Not that any of this mattered at first as I was concentrating all of my attention on just breathing.

If you’ve ever been up at any real altitude – you haven’t if you’ve never been outside of Europe – then you’ll know all about the lack of oxygen up there and getting knackered just making a cup of tea. Hell! just getting out of a chair was a chore and since I flew into La Paz from London and sea-level I wasn’t prepared for any of it. However, help was at hand – the guide book said that if you drink coca tea it helps. This, if you don’t know, is an infusion made from coca leaves – which grows in abundance in Bolivia, (coca has perhaps been the trigger for the current troubles). Well, the tea didn’t make much of a dent on the throbbing headache I had within hours of getting off the plane. This and the dawning realisation that all was not well on the girlfriend front meant that when a dodgy looking Argentinan bloke popped into the hotel room offering a quantity of the old ‘peruvian marching powder’ I thought – why the fuck not! Suffice to say that it was not a good idea.

Well, when in Rome hey!

Bolivia’s a land-locked country and as such I was surprised to find that it had an admiralty building, presumably with admirals in it – where did they keep their ships?. Anyway, after a week of (enhanced) marching up and down La Paz, this did not seem at all surprising. A lot of strange things go on in Bolivia, as I’ve mentioned Che Guevara died there as did Butch Cassidy and the Sundance Kid! (I kid you not – google it and check fer yerselves). 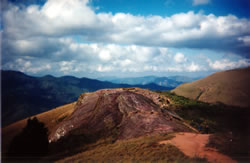 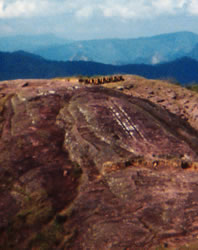 It’s also where a Swiss weirdo called Erich Von Daniken went, in the 60’s, and thought he’d found evidence of Ancient Alien Astronauts. The picture shows what he believed to be a runway/launch pad which aliens used in ancient times to journey to the stars.

Sad really. I’ve got to say all this ascribing of the achievments of ancient peoples to aliens pisses me off – as if humanity’s ancesters were incapable of building these magnificent monuments without recourse to alien assistance. In actuality these monuments were built by the mysterious (yet human) original inhabitants of the land but not the current indigenous peoples – the Aymara and the Quechua, (incidentally, these people are by and large leading the current protests).

Well by the time I took these snapshots me and ‘she’ had settled into an uneasy truce based mostly on a common desire to get to the other end of Bolivia. So, we made our way down the Andes to the hot plains below stopping off to catch some of the sights. I actually kept a diary of the trip and have toyed with the idea of turning it into some sort of road movie type script but have lost the diary (Doh!). I do remember that as well as the infatuation deflation I also had to cope with finding out – a week into the trip – that my dad had had a mild heart-attack – on the day I flew out wouldya believe? (I didn’t fly back but that’s another story). She (the girlfriend who wasn’t) decided to give up smoking and her cat, who she’d had since her childhood, died back in Britain – yeah! really helped her mood. Things could have been better.

But the old phrase ‘time is the great healer’ is very true and by the time we’d got to the plains, a few weeks later, I was actually really enjoying Bolivia. The food was getting tastier and these guys liked their chilli … (yum!) … but mostly it was potatoes. The people were wearing different cloths – not always brown – and the women weren’t all wearing bowler hats. When we were travelling by bus along a precarious mountain route I had a singing contest with a German bloke. The locals seemed a bit confused as we belted out the chorus of ‘Vee are ze Champions’ by Queen. I had a fight with a Canadian bloke because I didn’t know what the word aboriginal really meant, (I blame the old marching powder). And obviously I did my obligatory walking around a mountain business though I was shown up badly when a kid cycled past me (on the outside!) while I was gripping on for dear life. 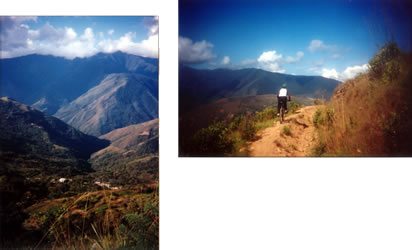 But the weirdest thing I saw anywhere in the country was at the end as we were journeying towards the border on a train. A journey of over 20 hours I must add – the bogs were really disgusting and I haven’t wanted to poo so badly ever in my life. Anyway, as I was sitting at the end of the train on what passed for an observation carriage squeezing my buttocks ever tighter, I read a noticeboard at the side of the tracks. There was nothing but farmlands stretching to the distant and flat horizon but this noticeboard left me gobsmacked – it was partially written in an Indian script … as in from India! It read ‘Guru Nanak Agricola’ !!!!

Apparantly, a commune of horse-racing Sikh farmers had been living there for decades. I told you Bolivia was weird.