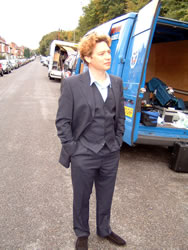 Okay, it’s been exactly a week now since shooting finished so I’m starting to get a little perspective on what occurred. First, I have to say that actors are human beings … I know I was shocked too – but they all go to the loo just like the Queen does – especially after a couple of bottles of brilliantly blagged Carlsberg.

Though having said that, I wouldn’t want you to get the impression that I was following Dexter Fletcher to the loo or anything like that, (the director wouldn’t let me). 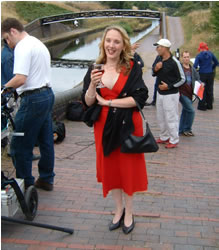 Somebody else I didn’t follow to the loo was Naomi Gudge who had the part of the female lead. She’s a lovely woman and a proper Brummie as well which was a bonus since she was genuinely the most talented actress at the auditions. In fact even at the CV short listing stage she was the one that seemed to be just right for the part – strange theatre magic at work I think.

As you can see, the scene with Naomi is set on a canal side which in Brum means it could be anywhere (did you know that we have more miles of canals in Birmingham than Venice does? … not a lot of people, outside Birmingham, know that – everyone in Birmingham, however, does!)

You can just make out the Sound Recordist – Oliver, Director of Photography – Christoff, Production Coordinator – Andrew, (who was in the production office with me and is the best damned blagger I’ve ever met!), and the back of Ann – the Swedish Costume Designer, (who had the plummiest home counties accent you’ve ever heard … go figure?). It was the biggest crew I’ve ever worked with – at least 25 members on any given day – but I guess that’s what will add value to the production. Certainly felt like the real thing when I went out on set, which I didn’t do everyday since there was stuff to do elsewhere and also that way I could avoid lugging heavy stuff about from setup to setup. 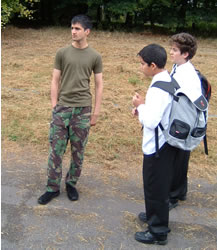 The other cast members were brummies too and had to go through the casting process. It’s really encouraging to think that there is all this talent in Brum but also quite depressing to think that Birmingham, the second biggest city in the country, has got a joke of a film industry. Of course Screen West Midlands’ initiatives such as this Digital Short and the Carlton TV/Screen WM First Cut are redressing the balance but we’ve got such a long way to go before we can match the quantity and quality of the output from Manchester. (I can rant about this for hours … but I’ll spare you)

[Update: I should add that this whinge was prompted by the lack of certain facilities available to filmakers in the Midlands in comparision to Manchester and not the filmakers or the films that are made here – It just annoyed me that everytime I was getting a quote for specialist equipment for the production I was told that we would have to pick it up from London or Manchester. This increased the cost considerably – and I was an AP afterall! … for chrisakes! we’re supposed to be the SECOND CITY but Nooooo, the powers that be deprive us of National Stadiums, overlook us when upgrading the Rail networks, dismiss our claims to be a City of Culture the list of snubs to Brum is endless and so, apparantly, is this update … sorry! … did I mention I could rant about this for ages?!]

In the picture, Irfan (in the combats) is playing the part of Ali who is the older brother to Abdul (played by Gathan; nearest to us). Just behind him is Adam who plays the part of Young Mike – Dexter’s younger version. Spot the matching hair!

Apart from the main cast there were 30 adult extras and nearly 20 child extras aswell and I had to find most of them. If I ever do a drama myself it’s going to have one actor, one location, one camera, and one scene … extreme dogma I’ll call it.

And I’ll do it all during the day so that I don’t need to use any lights. One of the scenes in the film took place at night time and we could have lit up Blackpool with the amount of lights we had that night. Not that I’m whinging, the lighting guys – Steve and his son Mel were brilliant and well worth the huge chunk of the budget that it cost to get them and their gear.

In the picture, as well as Dexter and Naomi, from the left you can see Francois Gandolfi, the director, Christoff the camera man, (who all the ladies fancied on account of his sexy french accent … b*****d! … I’ve got a sexy brummie accent but that didn’t seem to cut any ice with anyone – would you believe?), in the white shirt is Niall the 1st Assistant Director and the bloke with the shaved head is Andy Conway, the writer of "Year 6", (or "Year Six" as the Birmingham Post called it in an article about Dexter they published on Thursday … they didn’t mention me so sod linking to em! … they call themselves a local newspaper – Bah!).

The last day of the shoot took place at a posh school in Edgbaston and I got to be on set for the day. Being on set actually means a lot of waiting around most of the time and then short bursts of intense activity. 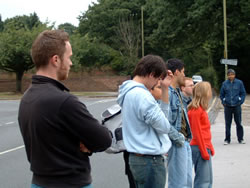 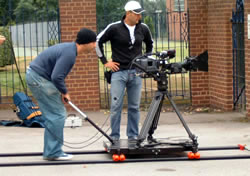 After setting up a scene, most people just move into the background, (can you spot the blogger in the picture on the left?). The rest of the people in this picture are crew and cast members and we were all on ‘keep the cars off the extras patrol’, while the camera crew – the DoP and Camera Assistant – Mos, (who’s also making the ‘making of’ documentary), do the sexy stuff.

No doubt, due to my stirling efforts, I can reveal that no schoolkids were hurt during the making of this motion picture. Although, 2 crates of lager, 4 boxes of crisps, 8 boxes of chocolate, 48 large bottles of water and 100s of cans of blagged fizzy drinks were annihilated … cheers Andrew!

So after two months of movie making magic mayhem what can I say? … CUT and THAT’S A WRAP.