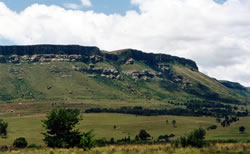 So it’s back to the virtual tour of my photo album – as I promised. A little while ago I found an excuse to visit an old college friend of mine who had long since emigrated out to South Africa.

It’s not possible for someone like me to write about South Africa without some mention of apartheid, just last week I remember talking to somebody who was saying that she still felt troubled whenever she heard a strong South African accent. It doesn’t bother me that much these days but then again I watch cricket and the accent has the effect of making me want to duck out of the way of battered cricket balls more than anything else. 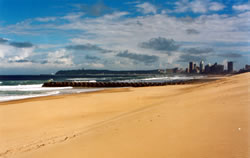 Anyway, accent’s aside, the country is breathtakingly beautiful and (displaying my ignorance and prejudices) very modern. (at least the bits I got to see) It had my favourite landscape feature – mountains but these had the curious aspect of looking as if somebody had sliced the top of them off – nobody could tell me why they looked like that. It also had, just outside Johannesburg a Lion Park where you could literally reach out and touch the big ol’ pussy cats. Infact, the previous year, we were gleefully told by the guides, a Japanese tourist had done just that … unfortunately the normally chilled out lions took exception to this and chewed said Japanese tourists arm off! I took my pictures with my arms tucked safely away. 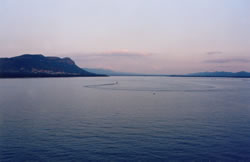 There are three big cities in South Africa, Johannesburg in the east, Cape Town in the west and Durban in the south. I never got to go to Cape Town which is a shame since it’s said to be particularly beautiful but that just means I’ll have to go back again sometime. I was, however, lucky enough to go to Durban – great place … sandy beachs, lots of Indians and fine, fine fish restaurants infact that’s a great thing about this country – good food. 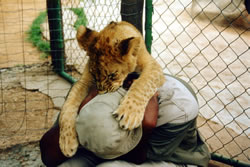 Friendly too – although it didn’t take too long to work out that there’s a certain amount of social apartheid at work with the white, asian and black populations only warily engaging with each other. Business seems to be the glue that is slowly binding the three communities together. (karma-cola like I guess)

I didn’t spend too long in the country but did enjoy the time I was there and although security was a big concern of most of those I spoke with, (with those who could afford it living in heavily guarded and fenced off compounds), there was a sense of optimism in all their attitudes. But the spectre of Aids hung over this optimism and for me, growing up being told about the exploding population growth in Africa, it came as something of a sobering shock to hear that in parts of South Africa the population is being, literally, decimated by Aids.

The recent drugs policy changes could not have come sooner, (well, they could have but the big fat patent-holding pharmaceutical companies and the politician’s were being disgustingly greedy, as is their habit).