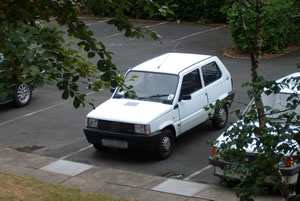 And here it is, the result of my mad gadget purchase of last week … not Bella but the picture of Bella – my beautiful, beautiful car.

Actually, it’s a bit of an anti-climax now that I come to think of it. Not worth getting all that worked up about really.

But at least there’ll be a lot more pictures here, which can only be a good thing because I’m running out of words.

(I hasten to add, not more pictures just of Bella … though it’s tempting!)

Urm… in case you’re still wondering, I’ve gone and bought a digital camera, specifically a Fujifilm Finepix A303, (I’m gonna get all anorak on ya’ll now), which I decided upon after considering the super sexy Canon IXUS v3 and the Sony Cybershot DSC-P7, (whose 5M pixels older brother is swamping the advert slots at the moment … anyway, who actually needs 5M pixels in a personal digital camera?).

In the end I settled on the Fuji, not because it is better than the others – the Canon is, by all accounts – but because it offered nearly the same quality for about a ??100 less. It also has the added ability of acting as a webcam. You know what that means don’t ya? …

Yes! coming soon to a browser near you – Live Bongo Vongo TV !!! (you lucky, lucky people)