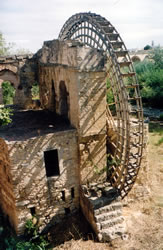 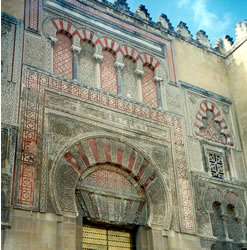 So, I left Seville and embarked on a mini hajj to Spain’s other sites of Islamic significance. Cordoba was my first stop, a smaller town than Seville and it seemed to me, dominated by it’s tourist trade. It sits on the Guadalquivir river and on the way to the main attraction, just before the Roman Bridge, is a huge watermill built by the Moors when the river was know as the Wadi al-Kabir.

The chief tourist attraction in Cordoba is the breathtaking Great Mosque – it’s huge! I walked around the perimeter of it and it took me the best part of an hour… well I was taking it easy; it’s hot in southern Spain! By good fortune, I had accommodation close to the mosque, in the old Jewish quarter and like the Juderia in Seville, the walls along the narrow, winding, cobbled and quaint streets were painted a bright yellow. In fact, not that far away was a statue of Maimonides, or Musa ibn Maymun as he would have been known by his Arab school chums. He lived happily in Cordoba until the Almohads, (al-Muwahhidun), the Taliban of their day, took over and Maimonides had to leg it across the straits of Gibraltar, (gibr al-Tarik), to North Africa, eventually to become court physician to Saladin, (Salah-al-Din Yusuf). 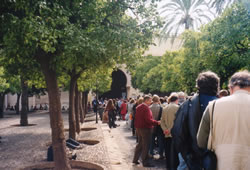 I dug out the requisite amount of pesetas, (yes, it was back in the pre-euro days), and waited in the vast courtyard of the mosque. The queue was long but the shading offered by the canopy of leaves from the palm and lime trees protected us from the worst effects of the Sun.

It was a bit bizarre thinking that the only other times I’ve waited in a queue to enter a mosque was during Eid celebrations. On those occasions, (perhaps a little hypocritically), I usually go to the Birmingham Central Mosque and I consider that to be quite large but it’s dwarfed by the scale of the one in Cordoba.

When you enter, it takes a few moments for your eyes to adjust to the darkness of the interior but when they do you are presented with row upon row of elegant columns, topped by double arches, that seem to stretch out to infinity. 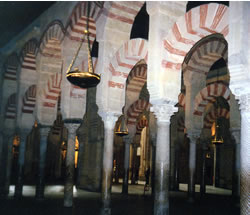 I wandered reverentially, through the cavernous interior, humbled by the brilliance and ingenuity of the people who built this. An obvious comparison can be made between the rows of trees in the courtyard and their petrified equivalents inside. On closer inspection it’s possible to discern that the ‘trunks’ of these stone trees are not uniform. A guidebook revealed that they were actually once Roman pillers… I love it! – it’s that Iberian cultural re-cycling thing again.

Talking of which, after Cordoba fell in 1236, some of the conquerors decided to christianise the mosque. Thankfully, unlike in Seville, it was decided not to tear the place down. Even they had to admit it was too magnificent to do that, some years later however, a somebody had the bright idea to build a cathedral inside it instead. Yes! that’s right!… they built a cathedral inside of the Great Mosque of Cordoba!

If that doesn’t give you an inkling of the vastness of the place then nothing else I say will. It does look completely out of place, slap bang in the middle, as if to affirm the ascendancy of the Christians over the Muslims of Spain. The cathedral seems brutal when compared to the spare elegance of the rest of the place. (But I guess I’m biased) 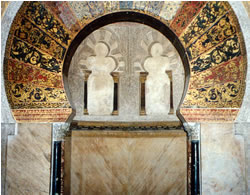 To be fair, when Emperor Charles V saw what had been done to the mosque, (at his instigation it has to be said), he was appalled and is reputed to have said, “You have destroyed something unique in the world with something that can be found anywhere.“.

In total, I must have spent four hours in the mosque and had to sit down and sketch what I was seeing, not because I’m any good at sketching but I find that it’s a great way of noticing detail. And you really need to notice the detail in Moorish design because the artisans who decorated the mihrab were, perhaps, divinely inspired.

I waited nearly half an hour to catch a glimpse of this as all who entered the mosque gravitated to it’s brilliance and seemed unable to tear themselves away from it once there.

All, that is, except for those resolute souls who had entered a mosque in order to worship in a cathedral!