Bullfighting is as synonymous a blood sport with Spain as fox hunting is with England. I don’t approve of either but while I was in Seville, curiosity killed the proverbial gatto and one Sunday I got myself a ticket to the modern day amphitheatre that is the Seville bullfighting arena. (I suppose, it was a case of – when in Spain do as the Romans did… sort of – except that bullfighting is actually an even older strand from ancient Med culture)

It was off-season and the crowd largely consisted of curious tourists and die-hard local fans. I was seated in a section that seemed to be mostly full of the former type and if I was the measure of my fellow travellers then we were sitting there like a herd of latter day Hemingways.

Hypocritical chattering gave way to a buzz of excitement as the proceedings began. (I’m not up to scratch with the correct terminology and quite frankly, can’t be bothered to find out, so I may improvise – bullfighting aficionados beware!). The bullfighters walked in formation into the arena and what a colourful troupe of glittery characters they were.

At the head of the stately procession, sauntering across the arena, were the matadors (or maybe they’re called toreadors ?), followed by some portly figures on horse back known as the picadors and bringing up the rear were a bunch of people who looked like cooks… with some horses that looked like they had a plough attached to them. 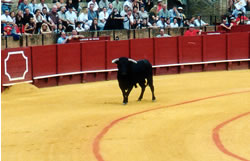 I was informed that the picadors were former matadors who took on that role as they became older. They were the first to go into action but not before much clapping and appreciation for the spectacle of the torro’s dramatic entrance into the scene, of it’s impending doom. (poor cow… I suppose that should be bull)

Because it was the off-season the bulls, like the matadors, weren’t mature; the protagonists and antagonists in this little tragedy were novices (novidades?). Nevertheless, the bulls were impressive enough. Personally, I would not want to get on the wrong side, (or the right side or in fact any side), of these bovine battleships but the daring bullfighters had other thoughts.

The picadors were equipped with lances, which gave them a slightly surreal, fat Don Quixote look but this is where the bloody business became disconcertingly real. The lances were driven hard into the necks of the bulls while they [the bulls] were charging at the horses. Now, horses are lovely creatures but not very bright – apparently they were blindfolded and clad in huge metal plates. These measures seemed to be enough to persuade them that several tonnes of irate bone and muscle crashing into them was no reason to be alarmed about. The point of the picador’s pointy stick is that it begins the process of weakening the unsuspecting bull. 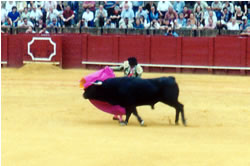 This process is continued by the next in line to have a go at the brave but doomed bull, the dancing poker boys, (like I said, I don’t know what they’re all called; could be something like bailanderos). Anyway, these guys have long shish kebabs in each hand and there’s three dancing poker boys altogether. They take it in turn to shove these shish kebabs into the bull’s, (by now), alarmingly bloody neck. The die-hard section of the crowd were applauding the finer points of the dancing poker boys‘ antics and after the bull was festooned with as many of the shishs as the lads could jab in, the crowd clapped at some length. We [the tourists] clapped too – it was almost involuntary. I knew what I was witnessing and at some level was becoming appalled by it but I was on an emotional rolercoaster and was abandoning myself to the sensations without trying to think through the significance of the events unfolding before me.

After the dancing poker boys, came the matadors mates who were flourishing the iconic red cape, (except that it was pink), to the crowds’ equally iconic shouts of Ole!. (Some believe this shout could have it’s roots in Spain’s moorish past as it may be a variation on a shout of Allah!). But the show really got going when the chief bull killer entered the stage. By this time the bull was visibly weakened but the proud beast still had enough wrath in it to pose a significant threat to any cocky novice matador. 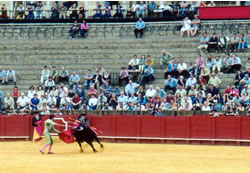 There were about three sets of bullfights that took place so that the crowd got a chance to see several novices try to make their name. One of whom was, (no point beating about the bush), crap. He was upended by his bull several times and at one stage got booed by the die-harders… hurray for that feisty bull.

A telling point in this whole business, is that when the matador had flourished his cape at the bull to the extent that the tragic creature could do little else but stand exhausted before him, mr. shiny pants was invariably strutting in front of the highest paying seats. 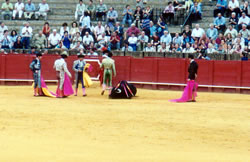 The cleanest kills are made when during one final lunge by the half dead bull, the bull killer plunges a sword, deeply in between it’s shoulder blades and straight into it’s heart.

It is unspeakably tragic.

I suspect that that is what the die-harders like about it.

All of us were on our feet, clapping furiously – for what I don’t know – the bull?, the bull killer?, the cathartic release of our held breaths at witnessing the death of a noble, passionate but doomed creature? I know that all the bravado with which we tourists were deluding ourselves prior to witnessing this tragedy, was forgotten. An english exchange student, seated next to me, summed it up when he said with considered irony – “Now I feel like a man!” 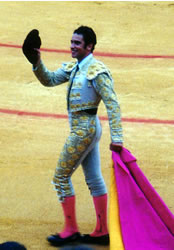 While the crowd’s deafening cheers rang through the arena the cooks raced to the pathetic carcass, harnessed it to the team of horses and contemptuously dragged it around the arena and out of view. To be butchered and sold in the markets nearby. Which I suppose makes it marginally less fucked-up than fox hunting.

And as the glamorous figure of the bull killer performs a lap of honour for his adoring fans, (die-harders pelting him with flowers as he passes by), I couldn’t help but notice that there was blood soaked into his stockings.

It may as well have been on my hands.