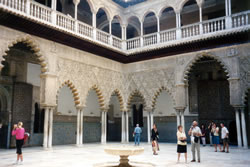 Back on the trail of my cyber-photo-album tour of the world, we cross the Pyrenees and venture forth into Spain. Specifically, to Seville in Andalucia.

A few years ago, I went to Spain to learn the language and chose Seville in which to do it. The advice from a lot of people was that Salamanca in Central Spain was the place to learn Spanish in it’s purist form but since I speak English with a bit of a Brummie accent I figured I’ll do the same for Spanish. (No!… not speak Spanish with a Brummie accent – I meant Spanish with a regional accent)

Another reason for choosing Andalucia, apart from the sunny weather, the beaches and the cheap flights to Malaga, was that it is the part of Spain that retains the most evidence of Spain’s 800 year old Muslim heritage. Ever since childhood when I saw ‘Charlton Heston put his chain-mail vest on’ in El Cid I’ve been gripped with a fascination for the place. The idea that there once existed a thriving part of Western Europe which had a mixed population of Muslims, Christians and Jews and which had bridged the gap between the civilisations that, (some would have you believe), are clashing now. 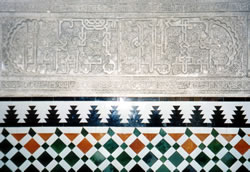 Of course, it wasn’t an Idyll, there was much bloodshed, tyranny, war and bigotry, (some things never change), but the lagacy of those times is reflected uniquely in the Spanish cuisine, architecture, language and even the people. The Alcazar, (taken from the Arabic word for fortress), is in the heart of Seville and although begun by the Moors, was developed to it’s current state by the Christian King Pedro employing muslim artisans. One of the things the Moors were rightly famous for was their brilliant tilework. All the time I was there I just couldn’t get over the attention the Moorish craftsmen had paid to detail. Sheer Quality!

You have to hand it to the Spanish though, they’ve done a great job of preserving the past and in a Catholic country where that past is Muslim that’s quite an achievement. Like all important Catholic cities, Seville has a fairly impressive cathedral aswell. The fascinating thing about the Seville cathedral is that it is said to be the last resting place of Christopher Columbus. Well, you know me and my hysterical historical fixation – 1492 is all I have to say… but I’ll say more anyway.

Not only was that the year that old Chris accidently bumped into the America’s while he was sailing westwards towards India but it was the year in which the last Muslim Kingdom in Spain, (Granada), fell to Isabel and Ferdinand’s Reconquest. Infact, it’s said that old Chris got his sailing orders from the royal duo while they were garbed out in the manner of Muslim rulers! 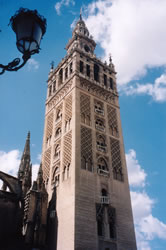 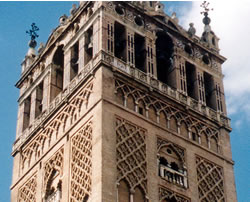 Be that as it may, in 1492, Seville had already been in Christian hands for several hundred years and so there has been more time to ‘Christianize’ the Muslim elements of the city. Nowhere is this more evident than in the cathedral itself. Prior to it’s ‘conversion’ to a Christian place of worship, it had been the grand mosque of Seville and you can see this in the bell tower which is hugely stunning. The lower and middle part of the tower are obviously Moorish but the top part of it was a later Christian addition. Of course, it’s a shame that the original minaret wasn’t preserved in totality but given that changes were made, I don’t think it’s at all a bad meld of the two quite contrasting styles.

Actually, the grand mosque itself was probably built on top of an even older place of worship from Spain’s Visigothic times and perhaps that itself was built atop an even older Roman building! This was a recurring theme I saw in Andalucia – the building on things past… but more on that next time.